Who Even Is An Entrepreneur? 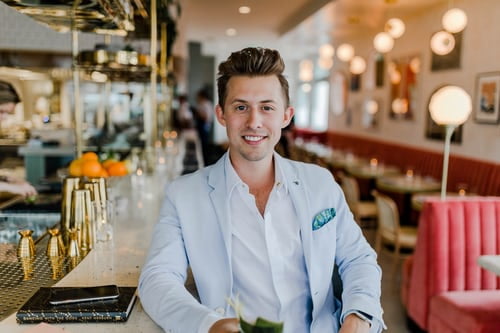 00:05 What makes someone an entrepreneur?

00:16 The word “entrepreneur” seems to be thrown around everywhere for everyone doing
anything.

00:28 But your brother who keeps bringing up his idea for coffee-flavored toothpaste might make the list too.

00:35 Entrepreneurs pop-up in all types of industries and can have widely different
backgrounds.

00:39 Some build personal brands, while others work tirelessly on a physical product they
believe in.

00:46 Really, anyone can be an entrepreneur, given an idea and the right tools to develop it into
a functional business.

00:52 Together, we’ll develop our business acumen and learn the importance of grit,
determination, and a fair bit of luck.

00:59 I’m Anna Akana, and this is Crash Course Business: Entrepreneurship.

01:12 Some people define an entrepreneur with buzzwords like “trailblazing,” “innovative,”
“problem-solving,” “passionate,” and on and on.

01:19 These might all be traits that entrepreneurs can strive for.

01:22 But, at its core, an entrepreneur is someone who sees a need and takes on the financial
risk to start a business to fill that need.

01:39 In which case, yes, there is a cookie-cutter entrepreneur.

01:42 Your idea might take the form of a physical product with a physical store — called a brick
and mortar business.

01:48 In Montana, Charlie and Barbie Beaton of Big Dipper Ice Cream took their passion for
locally made ice cream from one shop in downtown Missoula to appearing on Good Morning
America.

01:59 Or instead of a tangible product, your venture might be a national empowerment network.

02:04 GirlBoss New Zealand was founded by 20-year-old Alexia Hilbertidou after she was the
only woman in her upper-level physics class.

02:12 Her goal is encouraging high-school-age women to pursue STEM and leadership careers.

02:17 Or you might set your sights on an international online media empire, like Arianna
Huffington, the founder and namesake of HuffPost.

02:25 She founded her site (with partners) as a friendly alternative to news aggregators.

02:39 It’s clear that entrepreneurs come in all flavors.

02:40 I mean, according to the Global Entrepreneurship Monitor, over 100 million businesses
are launched each year.

02:54 So instead of just defining who is an entrepreneur, since it is such a wide scope – we can
instead narrow down our definition by understanding who isn’t one.

03:09 He notices a need — a shocking lack of cat transportation — and comes up with the idea
for the Cat-Cycle, which he pitches to his boss.

03:17 Me-Wow immediately sends the Cat-Cycle into production because it’s a genius idea,
obvi and it flies off the shelves.

03:25 Even though Congress is using an entrepreneurial mindset, by our definition, he isn’t an
entrepreneur yet.

03:31 The company Me-Wow actually took the financial risk to develop, produce, and sell the
Cat-Cycle.

03:37 Meanwhile, Beetle sees the same need for cat transportation and sketches out the
Cat-Board in his personal idea notebook after work.

03:45 He’s gained valuable experience working for Me-Wow and develops the Cat-Board in the
evenings and on weekends before striking out on his own.

03:54Using his personal savings, Beetle commissions a prototype that he shops around to local
stores.

04:00 A few are interested and he sets up contracts with them.

04:03 As his sales begin to grow, Beetle creates new designs, but he doesn’t pay attention to
what his customers like or dislike about the Cat-Board.

04:12 Because he failed to make valuable improvements to the Cat-Board for his customers,
sales plummet.

04:18 It’s a tough decision, but Beetle cuts his losses and sells his Cat-Board designs to
Me-Wow, which revamps his idea as the Dog-Board.

04:27 Beetle is an entrepreneur because he saw a need and took the financial risk to fill it!

04:32 It didn’t go so well because he didn’t incorporate customer feedback.

04:36 But now he knows where he went wrong and won’t make the same mistake in his next
entrepreneurial endeavor.

04:43 For a while, the classic story of an entrepreneur was someone who created one business
that became a long-term project, like opening a new restaurant or founding a tech startup to
make flashy phone games.

04:53 But that’s not the whole picture anymore.

04:56 There’s been a shift in the global job market that has opened the door for
entrepreneurship to become more mainstream.

05:02 Specifically, I’m talking about the rise of the Gig Economy.

05:07 Contract work, called gigging, is becoming more popular and taking up more of the labor
market.

05:12 And I don’t just mean gigs like musicians and comedians hopping between open mic
nights.

05:17 Instead of a long-term relationship where employees are paid salaries by the hour or year,
businesses are temporarily hiring people for specific projects.

05:26 This shift has made it financially easier for entrepreneurs to find people to get their
businesses going, without committing long-term to paying employees.

05:35 And it’s allowed early-stage entrepreneurs to find flexible work to support themselves as
they develop their product or service.

05:42 This doesn’t mean everyone in the gig economy is an entrepreneur, it’s just given more
people the opportunity.

05:49 So a more traditional path might be joining an accounting firm right after college and
working 9 to 5, Monday to Friday until you retire.

06:01 Some people might feel fulfilled with that kind of steady employment.

06:03 And the stability that comes from being a salaried employee with health insurance can be
incredibly valuable.

06:13 In the gig economy, you could have a couple ways to make money, in addition to or
instead of that 9-to-5 job.

06:20 And you can go online to look for gigs from anywhere — not just your real-life community.

06:26 So you might consult for a network of women small business owners on their day-to-day
accounting, create vlogs with tax software tips, and sell unicorn knit hats on Etsy that are knit
out of the softest fabric there is.

06:40 On the plus side, this allows workers to build robust portfolios of work and find fulfilling
gigs.

06:47 Having separate jobs can also provide a stronger sense of income security than one
full-time job.

06:56 Today’s entrepreneurs are well-suited for the gig economy because we know how to
hustle. 07:00

We’re independent thinkers who are comfortable with developing our own diverse income
streams, marketing ourselves, and connecting with others.

07:08 I mean, who hasn’t had a Lyft driver who moonlights as a cinnamon roll artisan, right?

07:13 But there are still problems with the gig lifestyle.

07:16 Sure, someone might become a Lyft driver to help fund their sugary dream.

07:21 But they’re almost certainly not doing it because driving strangers around is their

07:26 For some people, participating in the gig economy is a necessity, not a choice.

07:31 Scrambling to pay rent and afford food is another reason to have a bunch of gigs.

07:35 And, depending on the country and government, gig workers can have fewer legal
protections – like mandatory breaks and standardized pay — or they might have a harder time
maintaining insurance and retirement accounts.

07:47 This makes some countries more attractive to entrepreneurs, such as New Zealand,
Singapore, and Denmark, based on The World Bank’s annual analysis of the “Ease of Doing
Business.”

07:56 But even in those countries, there’s a difference between legally being able to take a
break and actually taking a break.

08:04 It can be a struggle to turn off the hustle — especially for those of us trying to create a
personal brand with our art or online presence.

08:11 But taking time for fun hobbies and spending time with friends and family are important
parts of being successful, and so necessary to stay mentally healthy. Trust me!

08:25 But if you ever wanted to be an entrepreneur, the gig economy has made it more possible
now than ever.

08:33 Taking a financial gamble is stressful, and so is working long hours to try and get a project
off the ground.

08:40 I know for me, the lack of structured work time often means that my business has no off
time.

08:46 And if I’m not careful, I can work around the clock and get myself exhausted.

08:50 But tons of us take the leap to start a new business and stick with it through the ups and
downs, so what exactly keeps us motivated?

09:03 Entrepreneurs get to be their own bosses.

09:05 This can mean setting your own hours and deciding on dress codes… or lack thereof.

09:12 Maybe you want to work from bed or while you travel, writing emails by a pool.

09:17 And for traditionally underrepresented groups in business like women, people of color, or
the LGBTQ community, ding ding ding, I am all those things. It can mean defining your own
destiny.

09:28 You can create an inclusive company culture and work environment, rather than feeling
stuck in an uncomfortable — or even possibly illegal — situation with a boss or coworker.

09:38 If someone keeps talking over you and dismissively says women can’t be funny, you don’t
need to hire them for your writer’s room or film set.

09:45 Or if a coworker from a previous job got fired for having a natural hairstyle, you can create
a business where that would never happen.

09:55 A study in the Social Science Research Network journal found that entrepreneurs start
companies because they mostly believe that:

10:03 They are inherently more valuable than how they appear on paper.

10:07 They are wasted working for someone else

10:17 And They are capable of turning their internal value into real life money.

10:24 Basically, entrepreneurs believe in themselves.

10:26 And sure, building self-confidence over time isn’t always easy, but it can be a powerful
motivator.

10:34 Yes, there’s financial risk in starting a business, but there’s money in running a successful
one.

10:41 Entrepreneurial lore is full of rags-to-riches tales, where people pitch the next SnapChat
and are launched into the business stratosphere.

10:47 Like, Oprah Winfrey has said she spent her early childhood wearing overalls made of
potato sacks.

10:54 But she became North America’s first black multi-billionaire and “Queen of the Daytime
Talkshow.”

11:01 Sure, this is the stuff of inspirational posters, and not everyone can make it this big.

11:07 But entrepreneurship does create a culture of opportunity that might work for some
non-traditional workers.

11:14 Of course, every entrepreneur with a massive success has also had hundreds of failures.

11:29 And it says stumbling is perfectly fine if we learn as we go.

11:35 But to identify and learn from failures, every entrepreneur has to ask themselves: what does success look like to me?

11:48 Is it selling your idea for a million dollars?

11:51 Is it becoming the CEO of a mid-size media production company and writing novels on
the side?

11:58 Also where is the sequel and when can I star in the movie adaptation?

12:10 But together we’ll learn how to redefine failure and pick up the pieces if it’s truly
unavoidable.

12:16 It’s not that successful entrepreneurs never faced failure; it’s that they didn’t quit.

12:21 So the bottom line is /anyone/ can be an entrepreneur with a little grit, determination, and
luck.

12:27 And remember, you may have stopped believing in unicorns, but they’ve never stopped
believing in you.

12:34 Next time, we’ll talk about that fundamental piece at the core of any entrepreneur: their ideas — where ideas come from, who to take them to, and how to turn them into feasible businesses.

12:45 Thanks for watching Crash Course Business. And thank you to Thought Cafe for the amazing graphics.

12:51 If you want to help keep Crash Course free for everybody, forever, you can join our community on Patreon.

12:56 And if you want to learn more about labor markets, check out this Crash Course Economics Video.

Who Even Is An Entrepreneur?